FIRST SALE We’re happy to announce we’ve made our first international sale for distribution rights. The Dark Place has been acquired by Pro-Fun Media for distribution in Germany, Austria and Switzerland.

The film is the second from Blue Seraph Productions bought by Pro-Fun Media for distribution in German-speaking Europe. Our first feature, Judas Kiss, was released by Pro-Fun in 2011. 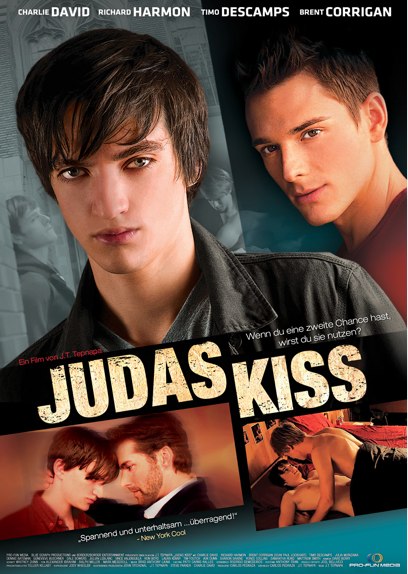 Co-director and producer J.T. Tepnapa added, “I am so excited Pro-Fun is picking up one of our movies again. I look forward to seeing how their audiences receive The Dark Place.”

“This is a real vote of confidence for the film’s commercial prospects,” said producer Carlos Pedraza, “to have a distributor acquire the rights so early, before we’ve even premiered the movie at any festival, heck, before we’ve even completed post-production.”

OUR FIRST feature, Judas Kiss, dubbed into German, was well received in Germany, with reviews there calling it “a touching love story, beautifully photographed and filled with magnificent, gorgeous-looking actors.” The German radio network PRIDE1 RADIO, called it ”the most touching film of the year.”

Judas Kiss went on to secure distribution throughout Europe, including the United Kingdom (TLA Releasing), France (BQHL), Belgium, The Netherlands and Scandinavia (OutTV).

Our international sales agent, Shoreline Entertainment, is negotiating with other distributors worldwide for release of The Dark Place in additional territories. No release date in Germany has yet been set. When it is, we’ll announce it on our website and Facebook page.