THE FIRST viewers of The Dark Place last Friday night weighed in with their reactions.

We invited backers of our Kickstarter campaign to a special, one-night-only online screening of the film, and asked them to let us know what they thought.

Here’s a sample of what they said: 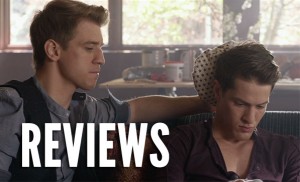 “Couldn’t stop watching it. Love it a lot!”

“I really liked the movie. The cinematography is awesome and the story was holding up and giving new twists until the very end.”

“You are the first of several crowd fundings I backed, that stand by their word and deliver the rewards, and even more like this extra screening. Thank you!”

“A few unexpected plot twists. Refreshing to watch a ‘regular’ story with a gay storyline where being gay isn’t an issue.”

“The flashbacks were cool in general but particularly slick when Keegan described past events while they played around him.”

“It’s a mystery with a twist in that the main character has such a different perception of the world that even the people closest to him aren’t certain they can trust his conclusions — or his feelings.”

“I really enjoyed The Dark Place, and am very pleased to have been a part of funding it through Kickstarter.  The story was excellent, the acting superb, the cinematography was first-rate, and the directing and production values were all very high.  The quality of this film is precisely what I was hoping it would be.”

“Loved that it is a psycho mystery revolving around gay characters, rather than a gay movie. Very enjoyable.”

“Well done! Great acting, directing, liked the story line. There were a lot of interesting details surrounding Keegan’s memories. I liked how you showed what going on in his head. There were some surprising twists that I didn’t see coming and some funny moments.”

“Absolutely loved it! Mysterious and engaging!”

“… Keeps you on the edge of your seat the entire film.”